It’s become almost cliché to say, but I was one of thousands of kids in the 1980s with a poster of a Lamborghini Countach tacked to my bedroom wall. Not the one my friend had with a bikini-clad model draped across a white hood. Instead, it was a red Countach, parked almost haphazardly on a double-yellow apex turn sharp enough to necessitate four or five bright yellow and black arrow signs warning oncoming drivers of its treachery.

When I’d get home from school, the Lamborghini was there waiting for me. I’d dream of flipping its door up, clambering in, and firing up that rip-snorting V-12. It stood out from the other posters that covered nearly every inch of my room. The Ferrari Testarossa was almost tame by comparison, and the Corvette ZR1, with its crisp folds that gave it away as a freebie from a copy of MotorTrend, was undeniably ordinary. To this car-obsessed fourth grader, the Countach was the ultimate—a mashup of a Le Mans prototype and an F-14 Tomcat fighter jet. When I finally saw one in the sheetmetal at a local car show, it cost me half the roll of film in my disposable Kodak camera. Save the bizarre Vector W2, it was simply the wildest car I knew. And it was almost a colossal failure. 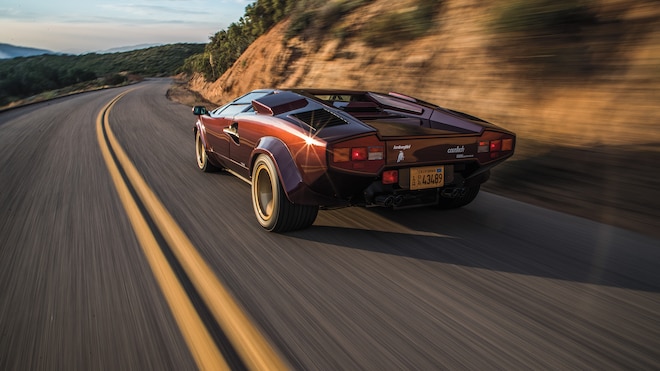 These “downdraft” cars were the most powerful Countach variants made and require a deck bulge to clear the six Weber carburetors.

The Countach was among the last Lamborghinis born under the direction of company founder Ferruccio Lamborghini himself. Work began in 1970 as project LP112 to replace the curvaceous but aging Miura. It was to use the same basic engine as that car (developed by former Ferrari engineer Giotto Bizzarrini), turned longitudinally in a new Paolo Stanzani-engineered chassis and enlarged from 4.0 to 5.0 liters. The first prototype, dubbed LP500, was given a radical new wedge-shaped body and scissor-style doors from Miura designer Marcello Gandini at Bertone, which borrowed from his prior Alfa Romeo Carabo and Lancia Stratos Zero concepts.

By the time Lamborghini showed the LP500 concept at the 1971 Geneva show (alongside the evolved Miura SV), the name had changed to Countach—thanks to Gandini’s Piedmontese styling assistant who would frequently utter, “Contacc!”—an expression of awe and astonishment in his native tongue. Wider, lower, and shorter than the Miura, the Countach was an instant system shock representing years of conceptual ideas come to life. It quickly graced the cover of nearly every automotive magazine worldwide.

But the following year, cracks started to emerge in the global economy. The ensuing turmoil forced Ferruccio to sell the tractor business he built his empire upon. His fledgling automobile enterprise, by then not quite a decade old, wasn’t doing much better. With the production version of the Countach missing deadline after deadline, the founder ultimately sold his controlling stake in the company to friend Georges-Henri Rossetti, a Swiss businessman. Lamborghini himself was retained to get the car to production, and in 1974 the Countach LP400 finally came to market with Stanzani’s advanced tubular space frame chassis but featuring the smaller 4.0-liter engine adapted from the Miura. Drained of his passion, Ferruccio eventually sold his remaining stake in Automobili Lamborghini and retired to the Italian countryside to make wine as his father had before him. He was still doing just that in 1993 when he died at 76. 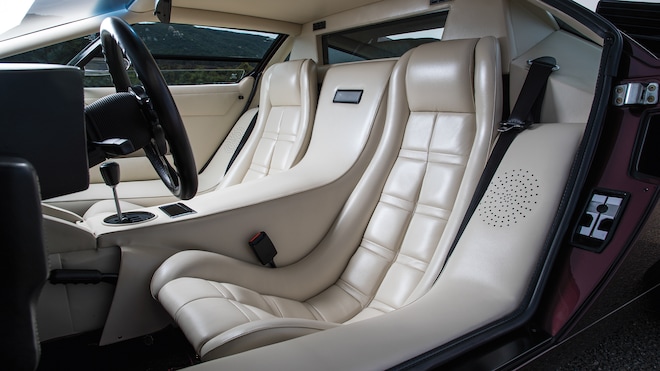 Lamborghini’s struggles continued even after the Countach started selling in the European market, and by 1980 the marque was in bankruptcy proceedings. That same year, French entrepreneurs Patrick Mimran and brother Jean Claude took control of Lamborghini in receivership and bought it outright in ’82. During Patrick’s reign as CEO, the company began selling the now eight-year-old Countach in the U.S. Success came rapidly, and by 1986, Patrick Mimran was ordering his third Countach “company car”—the one I’m about to drive.

It’s good to be the boss, and for Mimran, any old Countach wouldn’t do. This 1986 5000 Quattrovalvole wears one-off Bordeuax Speciale paint custom mixed by Lamborghini supplier PPG Milano. It looks sensational contrasted with the Oro wheels and Panna leather interior. The engine is special, too: It’s one of 300 “downdraft” European-spec cars eschewing fuel injection for six downdraft Weber 44 DCNF carburetors lined up in the vee of its now 5.2-liter V-12. Add special-order sport cams (and an extra oil cooler), and this Countach is among the most powerful built, with 470 hp, an extra 15 compared to standard downdraft models and nearly 100 more horses than the fuel-injected U.S.-spec cars.

A stealthy yet high-end period Alpine stereo rounds out the extras, as Mimran, a music fanatic, routinely used this Countach for blasts between his home in Switzerland and Lamborghini headquarters in Sant’Agata Bolognese, Italy. Even in a Lamborghini, that’s a long drive without tunes. Interestingly, this car was ordered without its single extra-cost option: the $6,500 V-shaped rear wing. Perhaps the reason was that the drag it created shaved about 10 mph off the car’s top speed, or perhaps Mimran just preferred the cleaner look. We think it looks perfect as is. 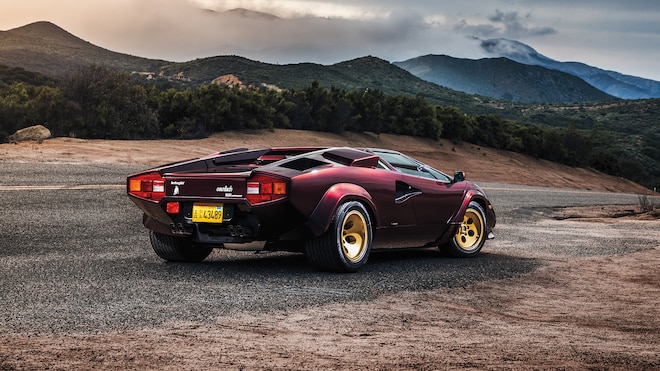 The car was so loved that it stayed with Mimran for a short time even after he sold Lamborghini to Chrysler in 1987 (which turned his $3 million initial investment into a $25 million megadeal). It passed through a Swiss owner until 2015, when Joe Sackey, a British expatriate investment banker turned U.S.-based supercar specialist, bought it from a client. A serial Countach owner who bought his first one brand-new in the 1980s, Sackey found the Mimran provenance intriguing enough that his intention of reselling the car quickly gave way to a lengthy and comprehensive restoration by Oceanside, California-based Dugan Enterprises. The goal was to put the car back in as-new condition. By all measures, it was achieved.

I reach into the depths of the NACA duct on the driver-side door and click open the latch. The door rises easily, assisted by a pneumatic prop, revealing the gently curving, fixed-back seats that look like they were ripped out of a spaceship. The first person to place a posterior in this driver’s seat was none other than official Lamborghini test driver Valentino Balboni, who drove the car straight off the assembly line. Recently, Balboni was given a second chance to drive it following the restoration, making small but critical suggestions to perfectly dial in its performance.

Driving a car you’ve idolized for years is a funny thing. Sometimes your heroes aren’t the machines you thought they were, though sometimes they’re even better. Weeks before I got into the driver’s seat, I’d talked to a couple friends who’d had seat time in a Countach for tips on what to expect. Tales of “trucklike” (its own cliché at this point in Countach land) steering and ride quality, finicky engines and clutches, and brakes that would have a hard time slowing down a hot dog cart are what I heard most often. I’m not sure which Countach they drove, but it wasn’t this one.

With a twist of its oval-shaped black key, the engine fires quickly. Already warm, it settles into a calm idle with no indication of fussiness. The gated shift lever needs a strong tug to get it into first gear (down and to the left, race car style), and the clutch pedal, while firm, isn’t the leg press machine I’d been led to believe. The throttle is lighter in action and a little sensitive, so it’s easy to go heavy on the revs when getting away from a stop. 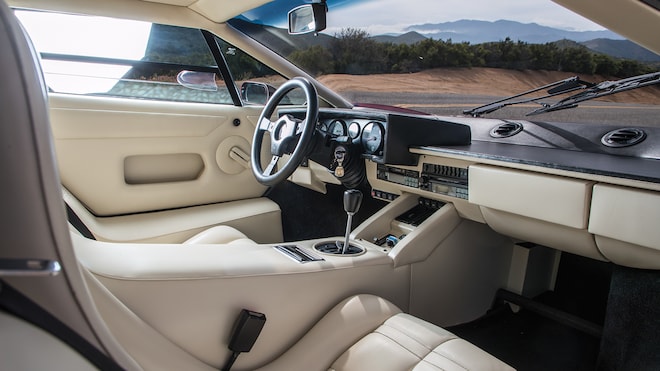 The personalized key fob is among the artifacts linking this car to Patrick Mimran. The speedometer is in kph, this being a Euro-spec car.

The steering, heavy at low speeds, begins to loosen, and after the up-and-right shift into second then straight down into third, the Countach starts to hit its stride. Getting more comfortable, I knock the car back down into second with a blip of the throttle, then get back on the gas with more conviction. The sound its six Weber carbs make right behind your head as they gulp down air is really something; I’m reveling in the rare opportunity.

Into third once more, and I pin the throttle under my foot as the tachometer makes a run for 7,000 rpm. I have the side windows cracked to better hear that giant 5.2-liter V-12 bellow out its quad exhaust pipes—a mechanical concerto that someone should set to a musical soundtrack. Getting out of the gas before a sharp right-hander, I’m treated to an angry series of pops and bangs that make the hairs on my neck stand up. This car isn’t interested in slowing down.

It quickly becomes apparent that a well-maintained Countach isn’t a car to fear. The visibility out the back and rear quarters isn’t terrific, and, mostly for that reason, it wouldn’t be great in rush-hour traffic or on busy city streets. But the ride isn’t jarring, the steering is precise, and the view out front is fantastic, with thin A-pillars and a virtual 180-degree view over the low dashboard that offers excellent sightlines of the road ahead. I can barely see the hood at all, and the sensation of asphalt rushing toward the car makes me feel as though I’m driving even quicker than my moderate pace.

With the sky turning ominously gray, we’re worried about getting this concours-grade car caught up in a downpour, but the twists and turns keep coming and the Countach devours them with its flat stance, those massive 335-section rear Pirelli P7s keeping the business end in check. It aches to run harder, but I decide to play things safe and hand the key back over to its rightful owner before I get too comfortable. After all, it’s never a great idea to get too confident in someone else’s Lamborghini. And anyway, somewhere in the back of a closet, there’s a dusty, old, thumbtack-pricked poster that needs framing.