Lewis Hamilton is poised to become the winningest driver in Formula One history. Many think he may be the greatest of all time, and certainly for his era. The famed British racer is a black man, and while he overcame obstacles, he was not subject to the kinds of barriers faced by another black racer 35 years ago.

Willy T. Ribbs, an American, tested with Brabham – and was quick enough to be in the big show – but never got to turn a competitive wheel in the highest form of motorsport.

Ribbs’ life and racing career is the subject of new movie showing on Netflix.

Willy, his son Theo and I casually sat together at a picnic table during lunch three years ago at the Indianapolis Motor Speedway during the SVRA historic racing weekend. He was there as a former Indianapolis 500 participant driving in the Pro/Am race.

We had a warm, engaging and friendly chat as we reminisced about Trans-Am, IMSA and so many other races I had watched as he raced. While chatting, he told me that Adam Carolla, a common acquaintance of ours, was set to make a documentary about him. He got a big grin on his face as he said, “It’s called ‘Uppity’.” We both laughed — hard. Not because of the racist slur – but for what we both knew it meant. 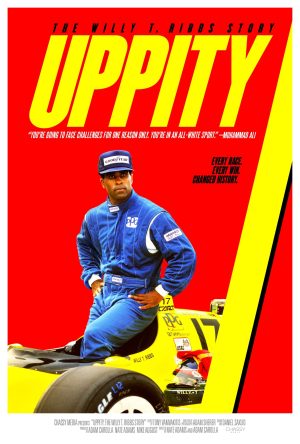 We had met many years before, in the 1980s, at Road America when my dad was the track’s promoter with his business partner, Carl Haas. For all the things I had heard people whisper under their breath, I found Willy to be quite charming and very kind to a teen fan. I had always held him in very high esteem, as a person and as a race driver.

Certainly, Ribbs was an anomaly. A black man winning races in what was otherwise a white male dominated sport. I knew Lyn St. James back then as well. I had really looked up to both of them as they broke unwritten barriers that today’s females and people of color really don’t have to face in motorsport.

From the moment Willy told me about the documentary, I was eager to see it. Carolla and his group, including producer Nate Adams, have become phenomenal storytellers in several racing-centric films including Winning: The Racing Life of Paul Newman, The 24 Hour War, and Shelby American. Uppity is yet another great historical document from the talented folks at Corolla’s Chassy Media. Their fascination with the subjects they tackle make for viewing that sucks you into the story.

The grandson of a successful plumbing company owner in San Jose, California, Ribbs was fascinated with cars and racing his whole life. His father was a hobbyist sports car racer in the 1960s. From the time he was a kid, Willy had dreams of winning the Formula One World Championship and/or the Indianapolis 500. Much of his grit and wisdom seemed to be channeled from his grandfather, who hated racing and expected his grandson to take over the family business.

Instead of going to college, Willy took his educational savings and, like so many aspiring drivers, went to England to race in the British Formula Ford series. He put down a winning record, but ran out of money before he could make the step into Formula 3. The UK, even in the 1970s, did not have the same attitudes about color as the young, talented driver would experience upon returning to the United States.

Needless to say, in NASCAR, Formula Atlantic, Trans-Am and IMSA, Ribbs was fortunate enough to race for the likes of Jim Trueman, Jack Roush, and Dan Gurney, to name a few — all who respected his talent. But as racial barriers seemed to be crossed – along with numerous podium-paying finish lines – Ribbs still was judged on the color of his skin.

All said, Willy T. Ribbs was an amazing shoe. One wonders what could have been had his immense skill as a wheelman been met by a color-blind sport.

The movie itself is really well edited and has so much period footage. It took me back to those days of my youth, leaning on the chain link fences at turns five and three at Road America — and at the Milwaukee Mile when Willy had his IndyCar rides. The commentary was spot-on from many insiders.

The only caveat I personally had with the film was having to sit through the pontifications of journalist Marshall Pruett. Otherwise, the other interviewees including Caitlin Jenner (formerly the race driver and Olympic athlete Bruce Jenner), Doug Boles of the Indianapolis Motor Speedway, F1’s Bernie Eccelstone, racer David Hobbs – along with archival footage of Trueman, Paul Newman and Bill Cosby (an investor in Ribbs’ IndyCar foray), made for wonderful storytelling.

This documentary is a fitting tribute to a great racing driver who performed any time he was given a break. It’s a story from which we all can learn. The film is currently running on Netflix and is available on DVD from Chassy Media.